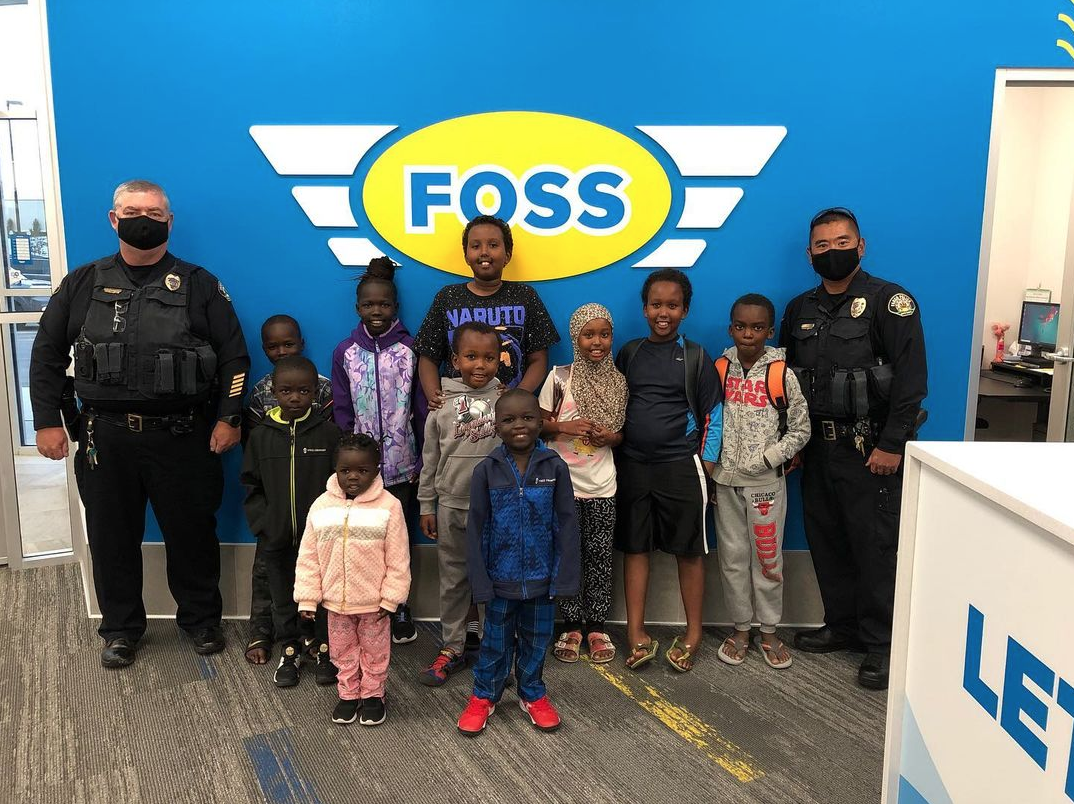 Teaching water safety is the number one priority of Foss Swim School. We also encourage people to learn to swim for its physical, social and confidence-building benefits, and kids probably think first of how fun water is, but it all hinges on safety. Co-founder Jon Foss was directly affected by drowning, in fact – his mother lost a brother to drowning as a child in North Dakota, and made learning to swim a priority for all her children, helping shape Jon’s desire to open a swim school.

With the opening of our new swim school in Fargo in the spring of 2020, FOSS was thrilled to be approached by the Fargo Police Department about participating in a local police program to teach water safety to new Americans – children who recently came to the country, or the children of recent immigrants – for free.

Spurred by Tragedy, Police Partner with Communities and Swim Schools

The program was the brainchild of Officer Vince Kempf, Cultural Liaison Officer for the Fargo PD. “In 2018, a child from one of these communities had drowned in another jurisdiction, and a leader in that community who I knew asked me to assist the family to contact an officer in that jurisdiction that could answer their questions,” he said. “Shortly after that, I saw a newspaper article that noted that 4 of the most recent 5 drownings in the Fargo area involved new Americans, usually kids. I asked, what can we do to help?”

The idea Vince came up with was to solicit local aquatic centers about offering reduced-fee classes specifically for new American youth that the police would pay for through the Badges of Unity Fund. The centers were excited to help, and the idea took off when one local business owner offered to fund the entire program.

Hannah Lindeman, site director for Foss Swim School in Fargo, was immediately excited by the opportunity when approached about it as the school opened. Hannah and other FOSS teachers volunteered to take the class, and recently finished working with their first group of nine kids. “It’s such a positive way to introduce them to the water,” she said. “We have kids who have never been swimming before. It’s a challenge, but also a fun thing seeing their reaction when they realize they are floating for the first time.”

For new Americans, there are several barriers to kids learning to swim, Officer Kempf noted. While the kids generally speak English well, it is often a second language for their parents, which can make finding and registering for classes challenging. Since they are new to the country, many families aren’t as active in the “lake life” of the upper Midwest, reducing exposure to water. For some families the fees can be a barrier, as can transportation to lessons.

“The result is that in the Fargo area, something like 80-85% of people know how to swim, but among new Americans it’s less than 50%,” he noted.

The program is specifically designed to address these challenges by reaching out proactively to families through community leaders they know and trust, taking care of funding, and even providing transportation with a retired bus the program acquired. Partner swim programs provide at least four hours of instruction, focused on water safety, acclimation, and basic swim skills. Since starting in January of 2019, the program has helped over 125 area kids from new American families gain confidence around water, while a similar program in neighboring West Fargo has served more than 125 additional children.

“It’s been fabulous working with the Fargo PD,” Hannah said. “For them to make swim lessons and safety a priority is a huge benefit for the community at large. For us, it’s such a great way as a new part of the city to become part of the community and invest in its future.”