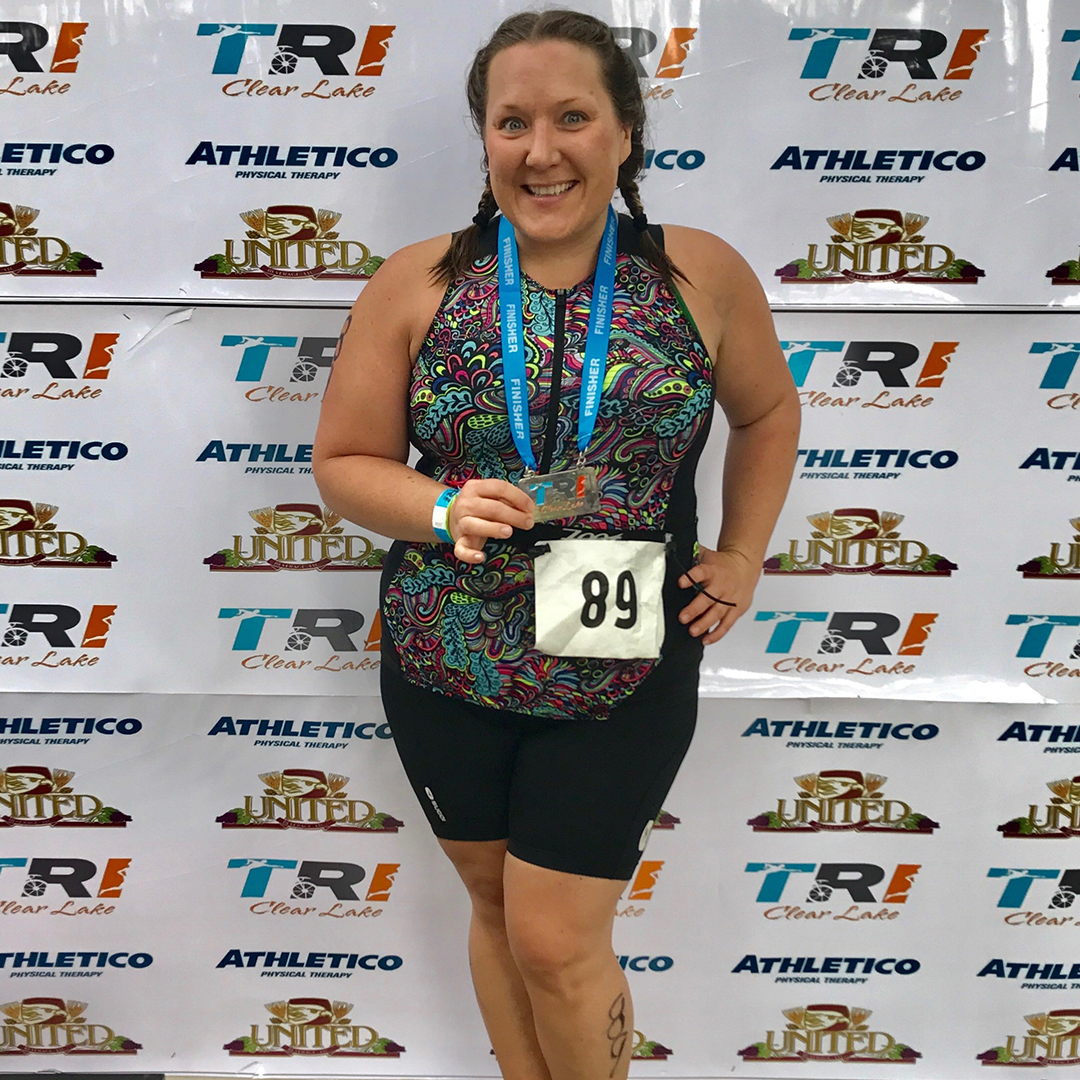 When Patricia decided to set a goal of finishing a sprint triathlon (half mile swim, 20-kilometer bike, 5-kilometer run), she had one overriding question: “Do I really know how to swim?” By no means a newcomer to the water—the Minnesota native had grown up playing in lakes, had taken basic swim lessons as a child and enjoyed time in the water—Patricia wasn’t sure what would happen when she tried to swim a longer distance than she ever had before on open water.

Those doubts are common among those contemplating their first triathlon, she said. “Everybody I talk to about this says, ‘I could do the bike and the run,’ but the swim freaks everyone out.” But while the swim is a barrier for many people, Patricia decided to tackle the challenge head-on with adult swim lessons at Foss Swim School.

A grown-up experience and wealth of knowledge for adult swimmers

Patricia’s decision grew out of an overall focus on healthier living, including nutrition and exercise. “A friend asked if I wanted to do a triathlon, and I said yes.”

When she began researching where she would get her swim lessons, she visited Foss, which she remembered her niece attending. She was immediately impressed with the experience, professionalism and engagement of the staff.

“We spent a lot of time talking about my goals,” Patricia remembers. “There were teachers there who had done a tri, and they all shared their knowledge. They helped me choose equipment, like goggles and suggestions on tri attire—I had no idea the complexity here but they made it easy for me!”

Patricia ended up choosing a semi-private class with one other adult swimmer. “What we found out quickly was I was very good at the backstroke. I worked on all the core strokes. We went for a concentration in form, technique and breath. I would work on form and technique at Foss, and then swim on my own at a larger distance pool to build endurance.” The lessons included tips on open-water swimming. “We liked to say that swimming in a pool with a bunch of kids was training for the experience of a race,” Patricia remembered. “It wasn’t quiet, there were a lot of people around, but if you are swimming a tri that’s what it will be like.”

A personal best is just the start

Over nine weeks, Patricia didn’t miss a swim, and felt her stamina and confidence build. When the day rolled around for her first-ever triathlon, the practice and conditioning that swimming had helped provide paid off. “I used all the strokes in that first tri,” she said. “I did well and felt great. I set a personal best time on the swim. It has been a completely amazing mind-body-spirit experience. I had a goal. This proved to me, if you set a goal and do the work, you can achieve it.”

And the goal didn’t end with one triathlon. Patricia will be competing again on Sept. 16 in White Bear Lake, Minnesota, and looks forward to building up to an Olympic-distance triathlon. And it has also kindled a new passion for Patricia. “Aside from how fun it is—which I really didn’t expect—I have just fallen in love with swimming.”