Rachel Bootsma has set a national record in the backstroke, is a three-time national champion in individual events at the college level (in addition to helping win relay and team championships) and has an Olympic gold medal for her role in Team U.S.A.’s victory in the medley at the 2012 games in London. Before that, she set records and brought home trophies for her high school in her home state of Minnesota.

But like many people, she wasn’t a fan of the water at first. “I was enrolled in lessons at FOSS at the age of four, and at first I was really, really scared,” Bootsma said. “I remember I sat out the entire first class on the edge of the pool.”
Eventually, the promise of fun and the efforts of patient instructors enticed her into the pool – “there was this big foam magic carpet, and all the other kids were on it,” she remembers – and a lifelong passion for swimming was kindled.

Benefits beyond the pool: Confidence, resilience, health, and friendships
Bootsma has retired from competitive swimming (and in fact recently took a year’s hiatus from swimming to pursue other interests she couldn’t while competing) but that doesn’t mean swimming isn’t still part of her life. 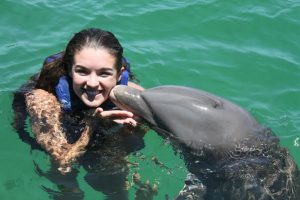 Throughout her life, Bootsma made swimming an integral part of her life, but didn’t let it overtake her. “I never missed a class in college due to swimming,” she said. “Instead, it made me really good at time management – I always had assignments done a week before.”

Now that she isn’t competing, Bootsma can recognize several other ways swimming has benefitted her.
“Swimming gave me confidence in myself,” Bootsma said. “I speak up when I see something I feel strongly about, and I believe what I think matters. That wasn’t always the case.”

Having goals and opportunities for self-improvement also taught her the importance of focus and taking challenges in stride. “It made me really resilient,” she said. “This is what I’m working towards. I was constantly challenged. I fell short way more often than I succeeded.”

All of this, Bootsma believes, has made her “a better friend, girlfriend and daughter. It allowed me to meet so many amazing people. Swimming creates a community unlike anything in the world, and that is something I never would have experienced.”

Finally, there are the health benefits. “As a kid, I wasn’t processing that I was swimming for health,” she said. “But as I got older, I started to see more people have a more sedentary lifestyle. I don’t think it hit me how much of an impact swimming had until I stopped swimming for a while.”

New challenges and a return to the water
In her year away from swimming, Bootsma got a chance to do things she hadn’t during competition, such as skiing, waterskiing, running and spinning. She also finished her degree in nutrition and public health at the University of California – Berkeley, and has a job at a company that handles multimedia rights for college sports.

These are new challenges, but swimming has helped prepare her for them. And of course, even without competition, swimming is still a part of her life. “Nothing else I’ve tried yet comes close to swimming,” Bootsma said. “I don’t feel complete until I get in the pool.”