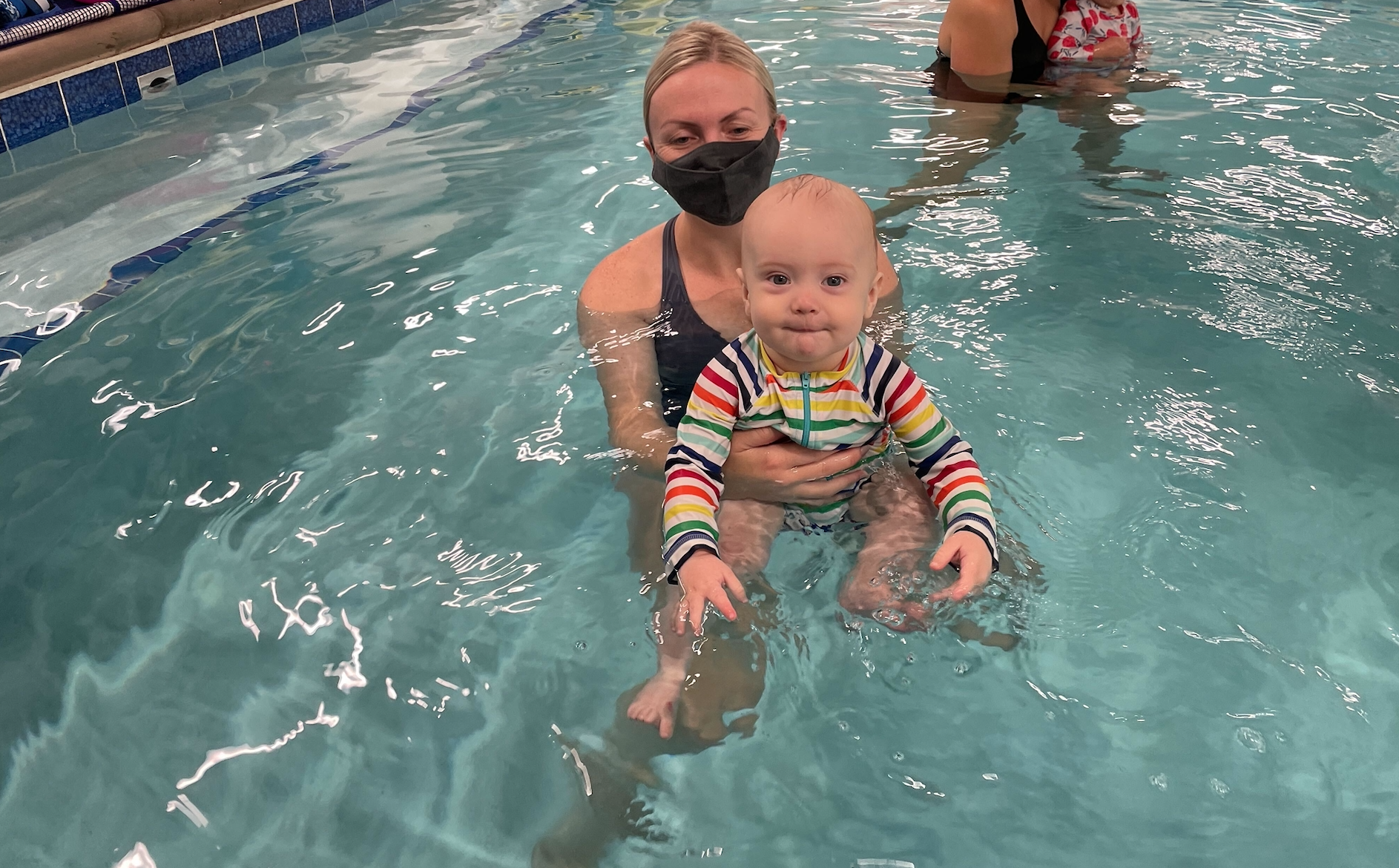 As we were packing up for our son Louie’s first day of swim school in September, I had so many questions. 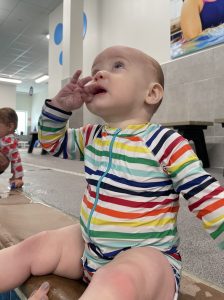 As a first-time mom, every new experience for and with Louie is a new experience for me, too. Our first day of swim school was no different; I had a bit of anxiety, but was excited. I was eager to see what he thought of the “big tubby” (bathtub) as we called it at first. I was excited to see if he would interact with the other babies in his class. I was looking forward to seeing a FOSS class in action after hearing so much about their curriculum (full disclosure, I work with FOSS via my business). I hoped, selfishly, that this would all be new to the other parents in class, too, so I wouldn’t feel like a fish out of water… so to speak.

I wondered, would he scream the entire time? How do you really teach a baby how to “swim”? Will he be wired and unable to nap afterwards?

Upon arrival, we were greeted cheerfully by the front desk staff who helped direct us to our lane and told us the name of our teacher. We headed out onto the pool deck (we already had our suits on underneath), removed our extra layers of clothing, and rinsed off in the pool deck showers as we were instructed. We headed to our lane, where our teacher Erica was waiting to greet us, and we met Sawyer and Freya—two little ones who would be our swim class buddies for the quarter. 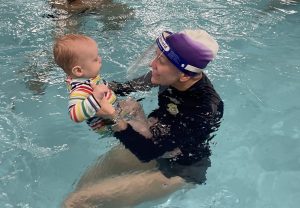 After brief introductions, Erica jumped right in. We sang songs, we splashed, we practiced getting water on their faces and putting their ears in the water. To my surprise, we even dunked the kids’ faces briefly—a prospect I thought would be terrifying, but wasn’t at all.

And, okay, a little mom bragging moment: Louie was an absolute champ. He didn’t seem freaked out by having his face dunked, or by getting splashes in his eyes. He did not love putting his ears in the water, and he let us know. But he didn’t mind when I handed him off to Erica to do backwards submersions, or when she’d “catch” him when we did Humpty Dumpty. All of the kids reacted a bit differently to each activity, and his classmates were just slightly more reluctant. In subsequent weeks, they warmed up—and as soon as we knew it, they were all living the FOSS motto and loving the water. 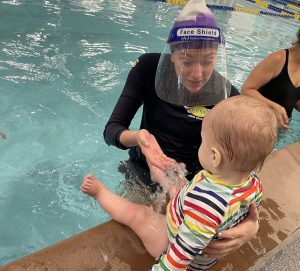 Several weeks in, we were joined by a couple tiny new classmates, Camilla and Sylvia. Erica was great about incorporating them into the process, and making sure their parents knew what to expect despite joining a bit later than the rest of us.

Over the course of the quarter, Louie continued progressing and becoming more comfortable. He learned to anticipate what was next, and knew if he pointed and grunted at the noodles or lane dividers, Erica would let him grab them for a moment before doing whichever activity came next. Like most kids, I’d imagine, he excelled at his techniques at home, but refused to do them in class—especially blowing bubbles and splashing along to songs.

And I became more comfortable, too. I learned he’d be fine if his face was underwater just a second longer. I learned to push him at the right speed and angle for backwards submersions. And whereas the first couple days were clunky in the prep and departure, we got into a rhythm. I found the spots in the locker room where it was easiest to get Louie and myself changed, and figured out that if I changed my own clothes first (while he was safely strapped into a chair or changing table), it was much easier to get him ready to go (and he didn’t get quite as restless). I learned what outfits to wear to make my own changing process fast and dry, and which of his swim diapers and suits were easiest to get on and off in a flash.

When it came time for progress updates, I learned Erica had cleared Louie to “graduate” to Backfloat Baby 2, but that it was our choice whether or not we wanted to move up a level. Regardless, I was happy he was showing progress, and felt grateful that we were placed with a teacher we both really liked!

To help other families like ours, I wanted to share more about our experience, and offer some tips for other new parents who might be signing their babies up for their first time. Here are a few things I wish someone would have told me:

Put a disposable diaper under the reusable one!

Although FOSS only requires a reusable swim diaper, the TMI of it all is that those are intended to catch, ahem, solids. Murphy’s Law means your baby will pee straight through on the way to swim school, and thus you’ll be washing the car seat fabric later. Soon, I learned to put a disposable swim diaper under the reusable one, preventing the impetus for car seat laundering. I’ve heard other moms put puppy pee pads in the car seat, which would work too. 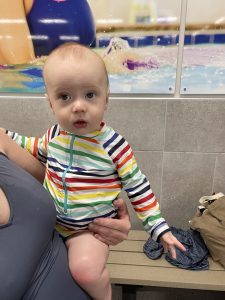 For the first lesson, I had Louie in his rainbow striped rash guard. The first day of school is for fashion, isn’t it?! It was cute, but it wasn’t needed. His reusable swim diaper was enough on its own, and the rash guard was way harder to peel off of him when we went to get changed after class.

FOSS keeps the pool and pool deck warm—which is glorious. But babes still get cold once they’re out of the water, and the locker room is cooler, too. I found that a hooded towel was not only easy to “hang” on him when my hands were full with our swim bag and other items, but kept him warmer, too.

There’s a safety chair AND changing table in the bathrooms.

Okay, so this one is slightly controversial. Regulations require FOSS to put showers in the bathrooms, so all of the bathroom stalls in the locker room also have showers. However, they request that you shower off on the pool deck so as to not take up bathroom space for the kids who might have urgent needs. While we didn’t shower in the bathrooms as requested, we did hop in them for five minutes so I could strap Louie into the chair, get myself dressed, and then move him to the changing table for a dry diaper and clothes before heading out. He wasn’t walking yet, so any other routine just felt chaotic and took twice as long. 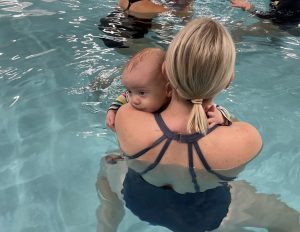 They will be sleepy.

I was so happy we chose a Friday morning class. Louie was starting his morning naps right around 9:30 at that time, so after class wrapped up at 9:15, we got changed, gave him a dry diaper, put his PJs back on and went straight home for a bottle and a snooze. Swim school days typically meant morning nap would stretch longer—sometimes an extra half hour—which was nice for all of us.

We’ve been out of swim school for a month or so, and I think we both miss it. We still sing “Louie’s here today,” “This is the way we wash our monkey cheeks,” and “It’s raining, it’s pouring” almost every bath time. Louie still blows bubbles, splashes, and dances along. If he could talk, I think he’d probably tell me he misses Erica and his friends Sawyer, Freya, Camilla and Sylvia.

For now, we’re staying warm and dry this Minnesota winter, but we’re looking forward to getting back in the water at FOSS very soon! 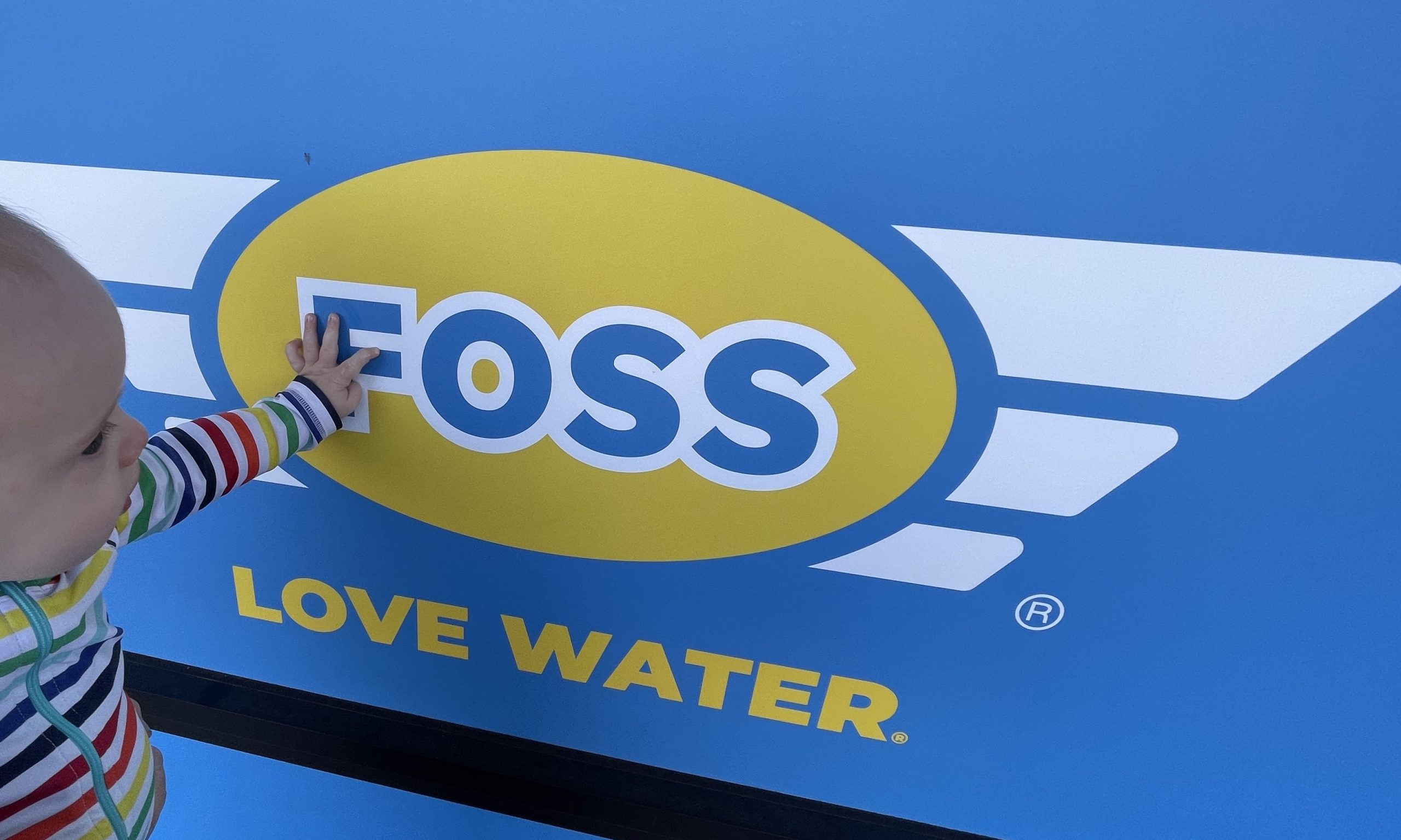 6 Tips for Swimming Siblings from a FOSS Family

Appreciating All The Teachers at Foss Swim School

How Effective are Baby Swimming Lessons?